The new generation of Nd: YAG lasers show how short the path to perfect, smooth, healthy skin can be without angiomas, spider veins, or capillary networks. Removal of any vascular formations on the body or on the face is now carried out at a new and perfect level of effectiveness and safety.

The procedure for laser veins removal is quick and painless. The laser acts selectively without damaging adjacent areas of the skin. The laser create heat inside the blood vessels, which closes the vein’s walls, eventually causing the vein to disappear. The laser is very precise and only impacts the selected blood vessel and none of the surrounding skin.

What are the indications?

How often do I need procedure?

The ideal course of treatment would be 2-3 clinic sessions with 6-8 week intervals between. Treatments take between 10 and 20 minutes, all depending on the number of blood vessels that are being treated. There is mild stinging in treatment.

After procedure, client should avoid taking hot baths and avoid excessive physical exercise for a couple weeks. Otherwise, all normal activities and routines can commence immediately after each treatment. In general, for successful rehabilitation, 2 main conditions must be observed - to wear compression underwear and maintain sufficient physical activity. Compression underwear - during the first 5 days it is not removed even during the night's sleep. This is necessary in order for the vein to completely “stick together” and heal. Further, compression hosiery is worn only in the daytime.

Concerned about persistent redness on the face?

The couperose, also called Rosacea, is a dermatological condition of the face. It is manifested by marked redness, and sometimes by the bursting of certain blood vessels of the skin.
Rosacea is a chronic skin disease that affects many people and carries with it a psychoemotional disorder and skin discomfort.
One of the most common symptoms of this pathology is couperosis. This is one of the forms of capillaropathy that occurs due to an increase in the diameter of blood vessels and an increase in the permeability of the vascular wall. An advanced form of couperosis often provokes the development of rosacea, which is characterized by vascular damage. The most common sites for symptoms are the cheeks, nose, chin and forehead.
Rarely, rosacea can present as thickened, swollen, and bumpy skin on the nose called rhinophyma. Rhynophyma develops when the oil-producing glands and surrounding connective tissues become enlarged. Rhinophyma develops in some men who have rosacea, and very rarely in women with rosacea.
In addition to a genetic predisposition, many factors are involved in the development of the disease. Vascular instability, hormonal, immune disorders, parasitic tick disease Demodex folliculorum, Helicobacter pylory infection. Chemical and physical factors, even stress can affect the disease. 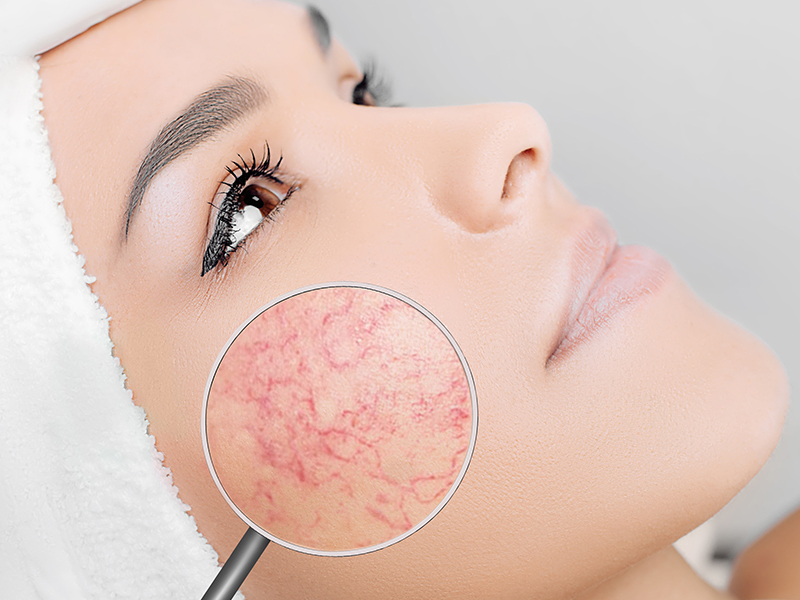 HOW DO LASERS AND IPL TREAT THE REDNESS?

The main purpose of IPL therapy is to eliminate cutaneous vascular manifestations and erythema or redness. The light emitted by the module passes through a special enclosing filter, which cuts off unnecessary light fluxes and transmits only waves with a length range of 515-1200 nm. When light is absorbed by hemoglobin, which is located in the vessels of the surface network, they are heated. As a result of this effect, pathologically altered vessels coagulate, and then completely disappear, inflammation decreases, the skin acquires a healthy color.
The laser ND:YAG create heat inside the blood vessels, which closes the vein’s walls, eventually causing the vein to disappear. Lasers are typically used to treat the larger vessels, while IPL is used to treat the smaller ones and the diffuse redness.

HOW MANY TREATMENTS WILL I NEED?

The ideal course of treatment would be 2-3 clinic sessions with 6-8 week intervals between.

In order to prevent and the appearance of rosacea, special attention must be paid to proper and thorough skin care, compliance with personal hygiene rules, timely medical treatment. To lead a healthy lifestyle, do not drink alcohol, spicy and hot food, drinks, do not overheat in the sun, be careful about the sauna, bathhouse, and do not overcool. Use the right makeup recommended by your specialist.

Cherry angioma is a characteristic benign vascular neoplasia that occurs in almost all people over 30 years of age. At the initial stage of development, smaller foci have a cherry or ruby ​​color, and deeper ones - maroon or purple. Most of the foci are found on the body, but can be located on the head, neck and extremities. The number of foci can vary from single to several hundred.

Cherry angioma is a small but very obvious cosmetic defect. In our practice, this is a very frequent procedure that is solved very quickly and almost uselessly with the help of electrocoagulation and laser therapy. 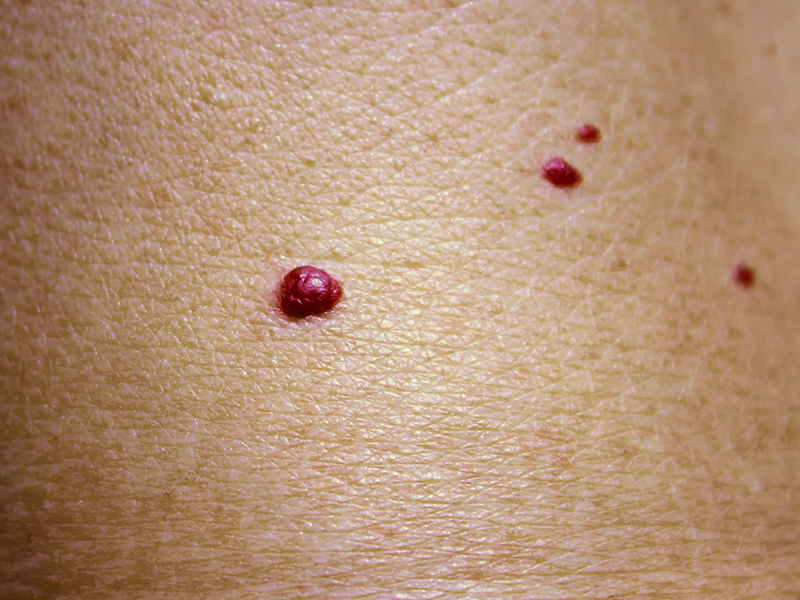